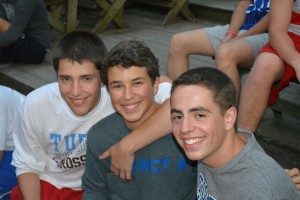 Going to camp for the first time can be a difficult experience. Being away from home for the first time, making new friends, and adjusting to the lifestyle and routine of camp is daunting for some kids to imagine. Now, try and imagine doing that, but instead of going to camp for the first time, you switch camps after four years at another camp, and you’re 14! That’s exactly what I did.
In the summer of 2011, after four years of sleep away camp in the Berkshires, I felt I needed a change as I wasn’t getting the real camp experience. I decided to look for a new camp; one that I knew would truly make me happy. Luckily, one of my good friends from home told me about Lake Owego Camp.
At first, I was skeptical of the idea of going from an elite, coed camp to a more rugged all boys camp. I was worried about making new friends, not being with my sister, and worried I was just not a camp person. I was mostly worried that I was never going to fit in with my bunkmates, who had probably been at LOC for 4 years. Boy, was I wrong. I can’t begin to explain how thankful I am that I came to LOC.                                                                      Owego was different because of the love and friendship that I immediately felt when I came through the gates. I remember the first thing I did when I got to camp was just “huck the plastic” (frisbee) and that made me so comfortable as I got to know everyone around camp. No one questioned why I switched camps or made me feel that I did not belong.                          From that first day in Greeley, PA, I knew that this was where I belonged. All my bunkmates immediately became my brothers and still are to this day. I don’t know what I would be doing during the summer without LOC. It’s given me a place where I know that I can be my true self at all times. For me, nowhere else in the world give me this opportunity.

With that being said, I’m going on my fifth summer at Lake Owego, and my first as a counselor, and I’m super excited to be back. If you’re one of the kids like I was who was worried to come to Lake Owego Camp, I can assure you one thing; you will love it here, as it truly is the best place on earth.

L.J. Horowitz is 17 years old and came to Lake Owego at an old age of 14, four summers ago. Even though he came late, he has a deep passion for LOC, and cannot wait to come back as a counselor this summer.  We can’t wait to have him back!

This entry was posted in Camp News and tagged Blue and White for Life, Lake Owego Camp. Bookmark the permalink.