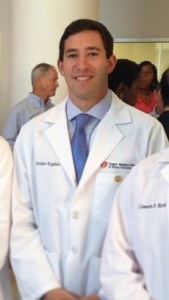 Hey Owego!! Hope everyone is having a nice start to another school year. For me, this year has started in a flash as I enter my second year of medical school at Cooper Medical School of Rowan University. It’s busy times like these that it’s nice to remember the amazing summers spent at Lake Owego Camp. I began going to camp in the summer of 1999 as a young camper in bunk Boone. 12 amazing summers followed. The friends I made remain forever. I will never forget ending my tent summer standing next to 6 of my best friends as fellow frontier week chiefs, something I had only dreamed of for many years prior. I spent 3 summers working as a counselor coaching baseball and continuing the tradition of an “Owego Dynasty”. I am happy to say that I came from a true camp family. My mom attended CTT as a camper, counselor, and camp nurse. My brother Michael was a LOC Olympic captain and sister Alyssa a CTT Olympic captain. Now that my time at camp has come to a close it is nice knowing that to this day I remain close with many of my friends that I made over all of those amazing summers. I recently moved to Philadelphia for medical school which was a big change for me seeing as I grew up in Los Angeles and attended college in Santa Barbara. Lucky for me though, I had many camp friends in the area to make the move that much easier. Just the other day I was out walking to breakfast when I ran into Josh Schtzul a fellow chief and my old counselor while in bunk Pike…hadn’t seen him in years but we each recognized each other immediately. Similar situations have since happened with the Ritterman brothers and my old bunkmates Kevin Nathan and Brett Frankel. Life goes on but Owego remains. I’m fast approaching my medical boards this upcoming summer as I continue chasing my dream of one day becoming a plastic surgeon. I think every past Owego camper will agree that no matter what path we all take, we are all Owegans at heart.
Jordan Kaplan

We love to hear from all of our Alumni. If you would like to share what you have been up to since you left camp, please email melissa@lakeowego.com