My Experience as a Frontier Week Chief 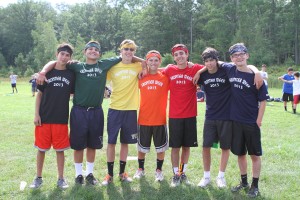 One of the best parts of Lake Owego Camp has always been the special events. It’s an opportunity for our campers and counselors to take a break from the regular schedule and challenge themselves in a different way. Frontier Week has been part of the Owego fabric for many summers. As you walk through the dining hall you can see the old plaques from the winning tribes and it serves as a great reminder as to how traditions play a big part in the life of an Owego camper. During Frontier Week, each team has four camper leaders, and the oldest of those leaders are the chiefs. I’m fortunate to keep in touch with many alumni from camp and I asked a few of them to share their experiences as a chief.

It’s been well over 15 years since I had the honor of being chief of the Abnaki tribe during Frontier Week in the summer of 1999, yet my chief T-shirt still hangs proudly on the wall of my childhood home. It was a week and an experience that I will always remember. Still to this day, when I am at a job interview or am asked about my leadership experiences, serving as a Frontier Week chief always pops to the front of my mind. While I don’t tend to explain my chief experiences in those instances (instead opting for something more professionally oriented), I realize I very well could. Serving as a chief during the 5 days of Frontier Week competition was a tremendous and humbling leadership experience. I learned the lessons and importance of motivating the team and getting everyone (campers and coaches) to align on a common goal, not to mention the hard work, positive attitude, planning and management needed to be a successful leader. It was a tremendous experience to have had as a 16-year-old – my first true leadership experience – and to this day, a source of terrific memories and lifelong learning.

Life at camp slows to an excruciatingly slow place over the last few days before Frontier Week. People were obsessed with forecasting who the chiefs would be – it was an undertone in almost every conversation. I was cautiously optimistic that I would be named a chief, but still unbelievably nervous at the breakout. I had never won a Frontier Week before (finishing second once) and wanted to win as a chief more than anything else. I remember when Andy Ruddick called my name, it felt like an out-of-body experience. I was so caught up in the moment that I could hardly pay attention to who was on my team. Being named a chief was one of the greatest honors that camp can bestow on you, and I had just experienced it.

Unfortunately, my team (Ais) could never really get anything started. We performed mediocre to poor in basically every event. It was really tough for me to see my dreams of winning Frontier Week disintegrate through my fingertips. I took a bit of solace in the fact that fellow chief and best friend Adam Roseman was steamrolling through with Tutelo. They dominated the majority of the events, and their victory was never really in doubt.

As a fiercely competitive person, headed up to the final fire with no chance to win was quite a bitter pill to swallow. I had poured every ounce of energy into these few days, and we fell short. With the fire raging on the upper field, I remember taking a brief pause before walking with my torch toward the fire. I took a deep breath, looked out at my team, smiled and gave a brief nod. I savored this moment.

I knew the tap from Kyle was coming (we finished fifth so I was the second person tapped), and solemnly nodded when he tapped my shoulder. I walked toward the fire, tossed in my torch, unwrapped my bandana, and threw it away forever.

I think about post-Frontier Week in two ways. One way is the personal lessons and memories I keep with me from those days and the other is the community of those who have held a torch on the upper field.

Personally, I’ll never forget what one of my coaches (Randy Freedman) said to me after the meal competition. We were sitting in the campsite (Infirmary), looking out on the lake, talking about the week. We both knew that our team had no chance of winning. Randy harbored his own Frontier Week demons, having placed second as a chief by a slim margin. He told me that you learn far more from losing and failure than you do from winning. I’ve found that advice to be true, and think about it constantly. It’s almost a mantra that I live by. Another lesson I personally learned is that no team or unit or organization can be successful with just one person. I thought that I could win Frontier Week myself, but it truly is a team effort. I’ve since won Frontier Week twice, and can attest that the achievement comes due to the effort and success of the group.

The community/network of those who have been a chief is one that is truly unique. It’s a bit of a brotherhood within the brotherhood that is LOC. The names that came before me are camp legends and lifelong friends. Further, these people could not come from more disparate camp backgrounds. What does a Josh Sztul have in common with Eric Dinenberg? Aside from sharing a summer monitoring Jacob “Hurricane” Allen’s shenanigans, not a whole lot. The common thread among chiefs though, is that they were chosen because they were viewed as camp leaders and examples for Owegans to follow.

When I come across former chiefs, there’s always an acknowledgement and a twinkle in their eye when we reminisce about camp. We were both part of something bigger than ourselves. It was a hallowed tradition before we got to camp, and it will hopefully live on for years and years.

It is difficult to count how many indelible memories and great friends I have from my time as a camper and counselor at Lake Owego Camp; however, unquestionably my experience as a Frontier Week chief is at the top of the list. The experience provided me confidence to succeed in other endeavors in my life and gave me the opportunity to hone my leadership skills.

As a camper, I always revered the older campers who were named Frontier Week chiefs, many of whom later became my counselors, coaches, and more importantly, lifelong friends. The winning Frontier Week chiefs were held in even greater reverence as their names, along with the names of tribe members, were painted on Frontier Week plaques in the dining hall, Owego’s version of the Stanley Cup.

It was for these reasons that I was both humbled and honored to be named a Frontier Week chief in the summer of 2002. Fortunately, I had a fabulous group of campers and counselors and we were ultimately victorious. Winning also meant that some of my best friends, who were also named chiefs did not win, an unfortunate but painful reality of competition. While the competition was fierce, my fellow chiefs and I congratulated each other when our teams won competitions and empathized in our team’s defeats. True to Lake Owego principles, we competed hard against our Owegan brothers but we never forgot that the experience is often more special than winning or losing.

Furthermore, although I was chosen as a chief because I was perceived as a camp leader, the experience as a chief taught me invaluable leadership and teamwork skills like delegation, trust, and collaboration. Leadership, as I quickly learned as a chief, is not about making the most triumphant speech before a competition. Rather, leadership is trusting team members, creating a feeling of inclusion, and making decisions for the betterment of the team after listening to all of opinions and ideas from team members.

Now, over ten years later, all of my memories as a Frontier Week chief are equally special. Indeed, the tired feeling in my legs when I gave my closest friend and fellow chief, Alex Hardy, a massive bear hug after we both finished the chief run in Over Land Over Water and the heat of the final fire against my back as my team exploded in happiness upon hearing our song played, the signal that we had won Frontier Week, are memories and feelings that will always remain. I can still remember the joy I felt watching my team’s ten foot fire burn through our rope before any other team’s and the disappointment of coming in fifth place in the Special Event competition. These emotions are heightened for Frontier Week chiefs as you feel, whether rightfully or not, responsible for your team’s victories and defeats. The sharp contrasts of emotions, however, are what make Frontier Week so special and unique. 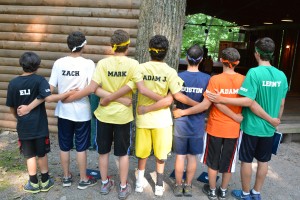