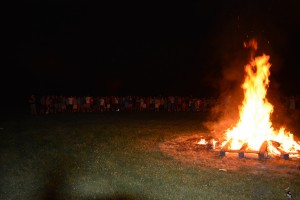 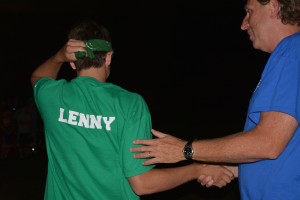 The 4 days of Frontier Week at Lake Owego are, hands down, the most anticipated and best 4 days of the summer. It is our own special version of “color war” but unlike any other typical camp’s final day’s of competition. From the minute the second session begins the buzz is in the air. When will they break out? Who will the Chiefs and Head Coaches be? Every camper dreams of being named Chief from their 1st Frontier Week. 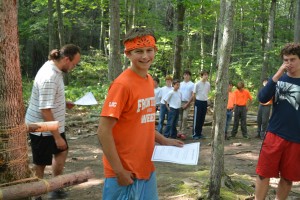 The break out varies every year, this year being a fire drill that led everyone up to Jacoby Field at around 9pm on a Thursday night. Once the whole camp was silent and all accounted for, fire works lit up the sky and TWO blazing fires roared at the other end of the field. One a miniature burning building and the other our traditional Frontier Week fire. 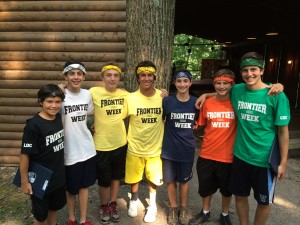 6 tribes and the 6 Chiefs and Head Coaches are named.It is the biggest honor of your camping life to be named Chief, chosen from our oldest campers. Counselors return year after year in hopes of being named Head Coach. The moment the Chief is named and then finds out who his Head Coach is, can only be compared to being accepted into to your first choice of college or even having your 1st child. I know this may sound extreme but, as with most camp moments, you have to be there. Additional tribe leaders are named, Scout; one of the youngest campers, Warrior; a 6th grader, and Medicine Man; an 8th grader, followed by the rest of the tribe. 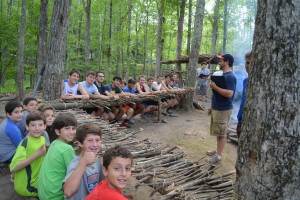 At Lake Owego, it has been our tradition to divide the camp into 6 teams/tribes so each camper and counselor gets to participate in the events and the tribe becomes very close. The members of the tribe work together as a team on most events and must support each other throughout the 4 days. Almost every event/competition either includes the entire tribe or individual event results are combined for a total score.  Events include Owego Raid, Banner, Frontier Competition, Overland/Overwater, Tribe Tug of War, Cheer, Rope Burn, Big Game, Meal, Camp Sight and Song. 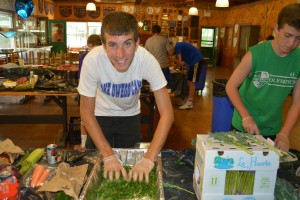 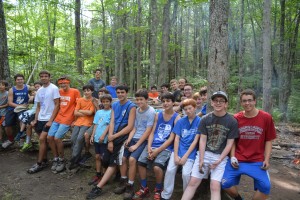 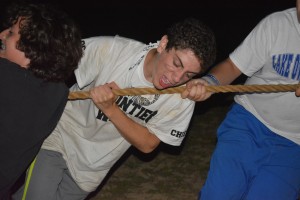 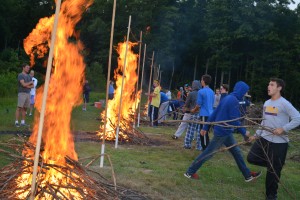 This summer, due to a slight wind, our most exciting event, Rope Burn, had to be redone on the second night of the 4 days. This led it to being combined with the Big Game that includes individual counselor events such as, a spicy wing eating contest, arm wrestling, mini rope-burn, running race, spelling bee as well as a surprise Head Coach event. This was a rare night that the entire camp was together, cheering each other on and was, by many opinions, the single best night of the summer. From the nail biting excitement of Rope Burn to the laughter and fun of the “wing bowl” and spelling bee, it was an unforgettable night of pure camp fun. Most juniors’ feet did not touch the ground as they were always on the shoulders or backs of a senior or counselor member of their tribe. 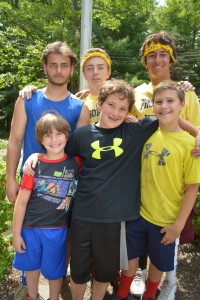 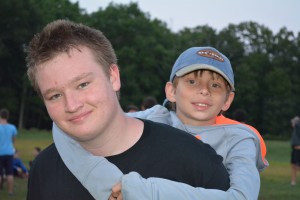 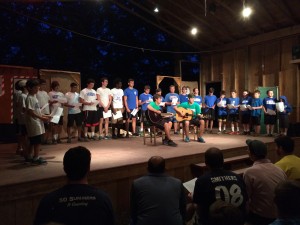 Two highlights of this year’s Frontier Week included the incredible Cheer from Diomede tribe, and, on the final night, Chief Lenny Miller, and Head Coach Paulo Stock accompanied their tribe, Lenape, on guitars, as they sung the winning song. You can view all of the songs and cheers at vimeo.com/lakeowegocamp. You can also watch our 2nd Session video that includes the best moments from Frontier Week. 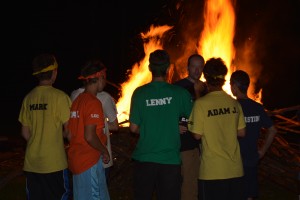 We end the 4 days in the same place we started, the entire camp around a roaring fire on Jacoby Field. Emotions are strong as each Chief stands with their backs to the fire, holding their torch, awaiting a tap on the shoulder to throw their torch into the flames. This traditional Native American Indian ceremony has been done since the 1st Frontier Week in the mid 1960’s. The winner this year was Diomede, led by Chief Dustin Brown and Head Coach Chris Kuiken. Very few things in life compare to winning Frontier Week, but every tribe fought hard until the end and created 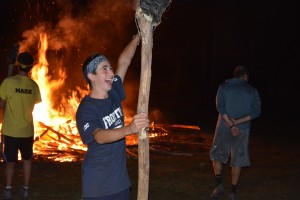 unforgettable memories. Until next year…

This entry was posted in Camp News. Bookmark the permalink.